The store will not work correctly in the case when cookies are disabled.

We use cookies to make your experience better. To comply with the e-Privacy directive, we need to ask for your consent to set the cookies. Learn more. 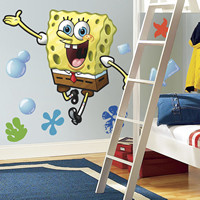 Who lives in a pineapple under the sea? Spongebob Squarepants!

Like all RoomMates, these officially licensed wall stickers are removable, repositionable, and reusable. They can be applied to any smooth surface, then simply peeled away when you're ready for a change. Stick them up on walls, doors, windows, mirrors, furniture, headboards... you name it! They won't ruin your paint or leave behind any residue when they're removed.